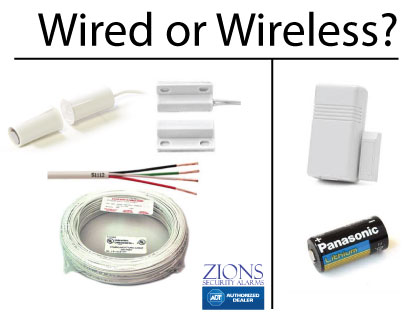 Posted at 20:53h in FAQ Security, hardwired or wireless by Jacob Menke 2 Comments

What does wireless mean?

Before I address the most common questions about this, I must clarify what wireless

means. A wireless security system usually refers to a system where no wires run from the control panel to the doors, windows, motion detectors, etc… It’s sometimes confused with cellular, which means there’s no landline phone connection.

The first scenario is when I get a call and someone tells me their home is already pre-wired or there is an old hardwired system that is already there. So what is better for them? Install a hardwired system and use what they have or ignore it and install a wireless system? I think it depends on how many wired doors and windows they have. If it is 10-15 or more, then I would use the wiring and put in a wired system. Here is our webpage that has the special for pre-wired homes. If there’s an existing hardwired system that has many wired zones, it would also be better to replace with the same hardwired type of system.

Keep in mind that all hardwired systems have wireless capability these days anyway. Many people only have 3 wired doors and a motion, so I would just recommend a wireless system in that case. The wireless systems are more advanced and have more features out of the box. They are also usually less expensive.

If someone doesn’t have any wiring and their home is finished, they should always go with a wireless system unless they are in love with a keypad or feature they can only get on the hardwired system. Even if they choose a hardwired system because they love the Tuxedo Touch keypad, we would still install wireless sensors on the doors and windows and only wire the keypad and siren.

Wired or wireless in a new home?

If someone is building a home and they are looking for a security system, they often ask me if they should get a wired or a wireless system.  Of course, the answer is, it depends. Consider the six points below to help make your decision. But almost every time wiring a house is going to be a more expensive option than installing wireless.-

Despite what others may say, there’s really not much of a difference between the two, and most people wouldn’t even know if they had one or the other.  There are two over-exaggerated differences on the internet that people ask me about all the time. One is: is the wireless less secure? It could be. But since 90% of new installations have been wireless for the last 10 years, it’s unlikely. In 13 years, I have never had a customer with a wireless system have an experience which compromised their security because it was wireless.

The other over-exaggeration is battery life, which I already discussed above. They last around 7 years! Batteries are not a good reason to choose a hardwired system. Some have had bad experiences with previous wireless systems and I would say that is the equipment they chose or the installations that were bad. Most have no problems at all (or the entire alarm industry would be in trouble). One small difference I have noticed is that the wireless sensor takes one second longer for the alarm to react then the hardwired sensors. Again, it’s not a very significant difference.

In most cases, I would recommend wireless. And if someone really wants a hardwired system, they do need to consider the previous points so they know what they’re getting into. Using a wired approach is usually going to cost more.