7 Burglary Fails to Make You Laugh 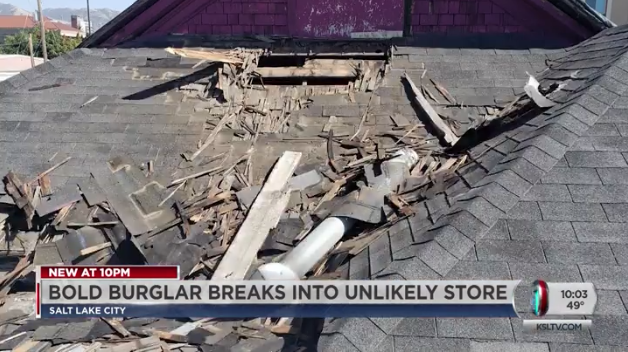 Posted at 17:47h in Humor by Heather Moon 0 Comments

This man broke into an adult store in Salt Lake City, Utah by punching holes through the roof. After he failed to break in through the rear door, he bore three holes through the roof before he fell into the attic. Then he triggered the alarm systems motion detectors as he walked through the store, looking for his favorite novelties. The police then found him covered in insulation and hiding among the merchandise.

While there was quite a bit of extensive damage done to the store, nothing was actually stolen thanks to the security system that went off.

Police in Lufkin responded to a burglary alarm call only to be surprised to find a deer running through the house. It jumped through the window, and it took a few minutes for the police officer to realize it was a small deer and not a person in the house. While we’re sure a deer didn’t have any plans to steal anything, it did cause a lot of damage to the house. I wonder how that insurance call went?

3. I Guess He Lives There Now?

This Utah man broke into a house and essentially started to live in it and pretend it was his. After his offer of 90,000 was rejected by the homeowner, the man threatened to forge documents that said he owned it. He then broke into the home, changed the locks, started moving the furniture out, and even had some of the trees in the yard removed.

Officers confronted him and have charged him with burglary, though he hasn’t been taken into custody.

4. The Robot was Framed

A lot of times, burglaries tend to be false alarms. Sometimes it’s an animal that got in the house, or it’s someone who didn’t intend to actually steal anything. In this case, the “culprit” police found in Washington County, Oregon was made of metal. Check out this twitter feed to see what caused such a stir. 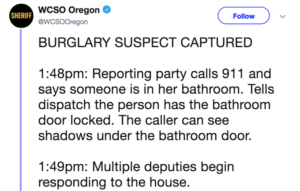 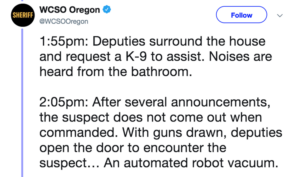 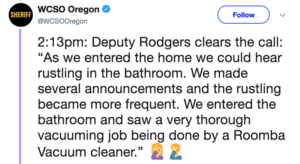 5. You’re Supposed to Leave after You Steal

This burglar in New Jersey apparently ransacked a house in the middle of the night, then ate the leftover chicken wings and fell asleep in the guest bedroom. That was where the homeowners found him and held him at gunpoint until police could arrive. I guess he was hungry and tired? 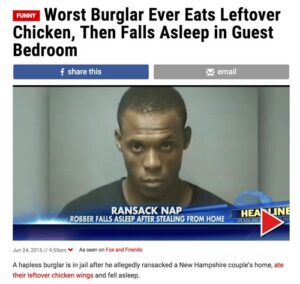 This guy in Hutto, Texas attempted to rob a bank, but had only made it to the first teller booth when police found him. So what he was doing? Well apparently he was found munching on M&Ms. They must have been some amazing M&Ms! 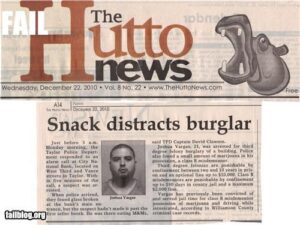 This robber learned the hard way that you will lose against a Taser every time. This would-be burglar did make an impressive hop over the counter, but was soon stopped in his tracks by a well placed Taser charge.

We can help with security

Just because these guys are terrible at stealing, there are people at there who are quite good. But a great way to deter them is to have a robust security system. Talk to us, or check out our security products that can help you protect your home or business.